Great work by everyone who competed in the novice competition at the week. Results attached for those that want them. Well done to everyone, and especially to all the podium placers! Remember to sign up for the intermediate comp coming soon (May).

Here are some of our members’ recent competition achievements.

Year 2 of the Monsters Vs Masters Comp (Under 40’s vs Overs). Another excellent comp with some great workouts programmed by Alex. The Monsters prevailed… Again. Check out the brilliant video:

Well done to Alex for finishing joint 4th and qualifying for the finals of the European Championships. Thanks to Ben at Sulston’s Kitchen for all Alex’s food, it’s really made a difference and helped him get his numbers up since he’s started training again after 2 years away from CrossFit. #cft #bringthebeastback#sulstonskitchen #goalexgo

Well done to everyone who did the first qualifier for the European Championships. Big shout out to Alex for coming 2nd in the Masters division after having 2 years away from CrossFit. Sulston’s Kitchen meal plan doing its job. #cft #thebeastisback #fuelledbysulstonskitchen

Liv, Mike, Gary and Ashley took part in the mixed pairs comp at Cheltenham. Both teams did really well and placed strongly.

Well done to Katie for coming 1st at Scale the Heights masterclasses over the weekend. #cft #winning #smashingit

Massive congratulations to CFT member Katie finishing in second place over the weekend at Pound for Pound in the masters category. #hardworkpaysoff#cft

A bit late but a massive well done to CFT member Sarah for smashing the London marathon with a time of 3:37:54. #cft #running #gogirl #speedy#londonmarathon #mylegshurt

Well done to all CFT members who competed in the open this year. Special mention to Katie who, in the RX female masters category, finished 3rd in the UK, 7th in Europe and 93rd Worldwide. Also well done Gary, who in the Masters scaled category, came 11th in the UK. #cft #crossfitopen2017#goteam #goldonoldies 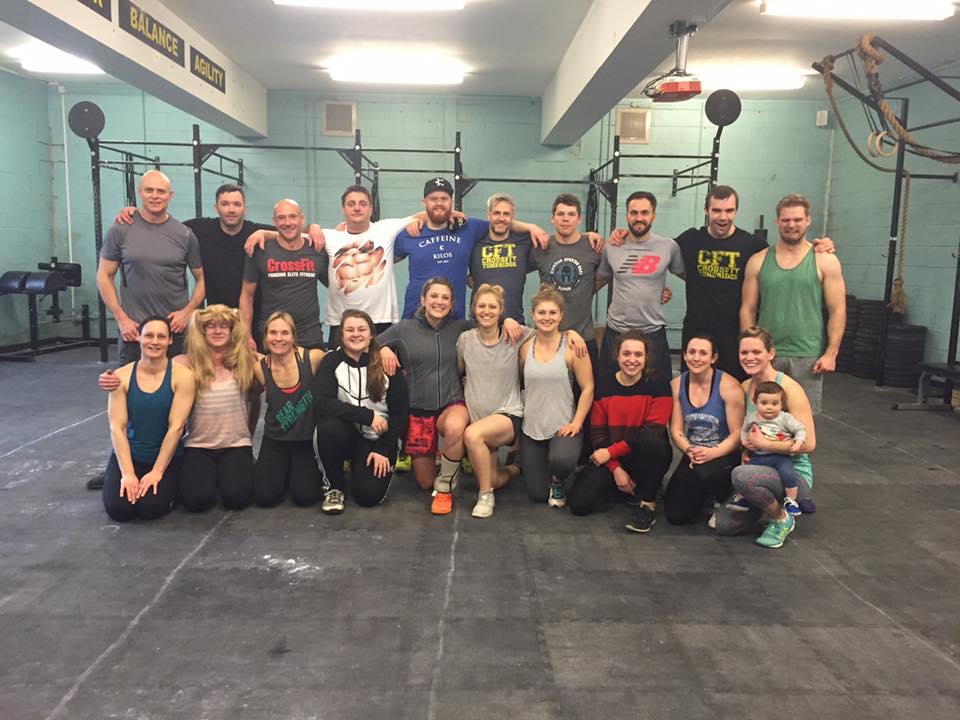 To celebrate the start of the 2017 Crossfit Games, a few of our members got together on Friday night to start the open season with a bang. Thanks for Prem for the video.

1st Anita Card by a landslide victory. If we all didn’t know her and what she has been through this year we probably wouldn’t of even know that she was diagnosed with Cancer. She continued training throughout her treatments and with a smile on her face. A great inspiration and worthy winner.
2nd Mike Philips. Always pushing hard and bringing up the standard of the box. He also has helped many since passing his Level 1 coaches course.

1st Sophie Grant. Having had her second knee operation a year ago she has gone onto smashing new PB’s, qualifying for major comps such as Battle of the Beasts and been an all round team player in the gym.
2nd Emma Tiong. Emma has been in the top 3 for both Athletes & Coaches athlete awards for the past few years and there is pretty much nothing she hasn’t mastered this year.

1st Claire Palmer. Claire has come on leaps and bounds this year, from scaling wods to now winning many of them. Claire is now one of our strongest females and is consistently give Rich a run for his money.
2nd Jacqui Harding. Jacqui only missed out winning by 1 vote. Over the last year she has made huge improvements particularly in her gymnastic skills. I wouldn’t be surprised if we see her joining the muscle up club next year.

Another great turn out by CFT members for this one, Rich Palmer, Sophie Grant who placed 2nd in their summer event, Katie Latham and Matt Hollamby making a come back to CrossFit as well as Rich Spence who follows the CFT competitor program. Once again everyone did the club proud with some very strong performances, particularly the girls both placing comfortably in the top 10. Rich Spence was unlucky not to win the competition going into the final with an 18 point lead but unfortunately the scores were wiped for the final and he finished 2nd in the final event and therefore overall.

This was online masters competition that consisted of 5 workouts over 10 weeks. The difference with this competition was that the older you were, the greater handicap you were given, aimed at evening the playing field. Gary Harding had some great results especially after coming back from a huge injury last year winning him the scaled competition and with doing some of the workouts as RX.

We use cookies to ensure that we give you the best experience on our website. If you continue to use this site we will assume that you are happy with it.Ok